Acts for Russian and foreign clients in family and inheritance disputes, and provides comprehensive legal advice to representatives of the entertainment industry (show business, sports, art) on matters related to professional activities and private life, including concluding deals with works of art, philanthropy and reputation management.

An acknowledged specialist in civil, business, family and international private law, as well as comparative and common law. In 2019, Ekaterina Tyagai was awarded an honorary diploma by the Association of Lawyers of Russia for many years of hard work, high achievements in the profession in the field of jurisprudence, and a significant contribution to the development of the Association.

She began her legal career at Alfa-Bank, where she specialized in legal support of international operations, including due diligence of non-residents.

In 2008, Ekaterina joined Legist, one of the oldest law firms in Russia, where she was a partner before joining Pen & Paper. During this period, she gained extensive experience in providing comprehensive legal advice for large businesses and private clients. In her practice, Ekaterina focused on issues of civil and family law, advised clients in the course of divorce proceedings and property disputes, as well as child disputes, and prepared more than 10 expert opinions on various aspects of family law, most of which were presented to Russian and European courts and tribunals (including the Swiss courts, the LCIA and the High Court of London), as well as regularly forming the basis of the reasoning behind court decisions made in favor of her clients. Ekaterina advised on several major transactions in the market of contemporary art, and acted for clients in the attribution, provenance and evaluation of antiques they had acquired. Ekaterina’s legal assistancewas also sought by athletes in the process of negotiating and formalizing relations with clubs, as well as art and show business figures who instructed Ekaterina on the protection of intellectual rights and reputation.

Ekaterina successfully combines the practice of law with academic activities and teaching at Tel Aviv University, Israel, and at Kutafin Law University, where she heads the department of family law.

She defended her PhD thesis on title issues in common law in 2011.

From 2011 to 2014, she was Deputy Head of the Department of Civil and Family Law at Moscow State Law University, and during the same period she headed the Institute for Foreign and Comparative Law.

In 2014, she created and became head of the Institute of Business Law, Moscow State Law Academy, which became one of the most successful educational projects of the university. In 2015, she was awarded the certificate of gratitude by the Association of Lawyers of Russia for her social contribution and active work in the field of higher legal education aimed at studying the legal regulation of business.

She was Vice-Rector for Academic and Methodical Work at the Moscow State Law University between 2018 and 2019.

She created and became head of the Department of Family Law at the Moscow State Law University in 2019.

Ekaterina is a visiting professor at Tel Aviv University, The Buchmann Faculty of Law, teaching courses on property law and comparative family law.

She is the author of Real Estate Title in the US: Complex Structural Models (Prospekt, 2018) and Corporate Relations: Complex Problems of Theoretical Study and Regulatory Framework (Norma, 2014), as well as textbooks on civil law and numerous academic articles.

She is fluent in English. 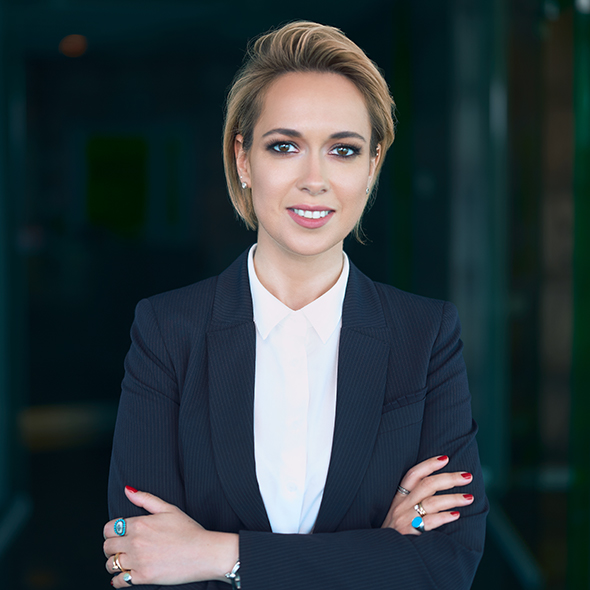 Protection of intellectual property, legal advice on investments in the art business:

Legal advice on blackmail, insults, cyberbullying, and harassment in real life and on social media.